The inland bays between Finland and Sweden will find their waters rising and falling in keeping with the sloshing in the greater ocean of the Atlantic, with these exceptions. First, the land masses buffering these ocean bays from the Atlantic funnel the water through the inlets, so that rushing increases there, and these inlets are far less safe for waterborn craft that under normal circumstances. Second, the amount of water that can rush in, and later rush out, of these ocean bays is delimited by time, so that a given slosh may not reach the level that is does along the Atlantic coast before reversing direction. Thus, the water may not rise as high, in a flood tide, along the shores of the bays. Third, because there is less water in the bays, and the flood tide less strong along the bay shores, it my not be necessary to escape inland to the degree along the ocean shores, or perch on as high a hill. Nevertheless, the general advice to be inland by 100 miles, and be 200 feet above sea level, is a good guide.

Survivors in Finland, being on low ground, will find that where their placement during the pole shift was an advantage, afterwards their land will disappear under the rising waters caused by polar melt. Finland is not on an earthquake fault, has no volcanoes, and is relatively protected from tidal wave wash. Within two years after the shift, however, the ocean will cover the land, so survivors must be prepared to move.

Nellim, near lake Inari, is a good choice for those in Finland who might be worried about immigration into the highlands of Norway and Sweden, and fear rejection. It is within the boundary of Finland. This site is far enough away from the Gulf of Bothnia to avoid any tidal wave during the pole shift, being 100 miles inland and 200 feet high. The Arctic will slosh, but the slosh will be directed not directly south to your site but in a sweep along in the direction of Siberia, although here again you are 50 miles from the Arctic and almost 400 feet high in elevation, so should be secure. Stay on the SW end of the lake for added safety. Once past the shift, borders will get more plastic, and migration to higher ground in Norway and Sweden, to the fishing ports that will quickly be established in both those countries, could be arranged. Good choice! 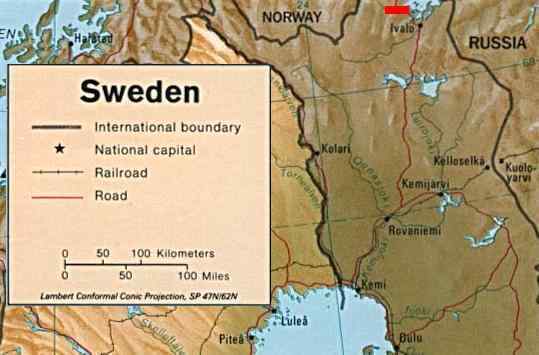