Sweden does well both during and after the coming pole shift, due primarily to its high altitude and lack of volcanoes. Facing a large ocean bay, and buffered from direct assaults from the Atlantic, the waves sloshing on her shores will not be monstrous, but will tend to ride up into the ravines with a tidal bore. The higher points toward the middle of the peninsula, and those points further inland along the peninsula, will be safest from wave action. Situated mid-way between the Equator and the North Pole, the coastline of Sweden will be subject to tides driven by various factors. During the week of rotation stoppage, water pulled to the equator by the former rotation will flow to the poles, causing northern coastlines to have higher tides. During the shift itself, the Atlantic will widen, but prior to the shift and before further ripping of the Atlantic Rift occur, stretching of the existing land under the ocean will tend to pull coastal land down, further causing high tides.

The inland bays between Finland and Sweden will find their waters rising and falling in keeping with the sloshing in the greater ocean of the Atlantic, with these exceptions. First, the land masses buffering these ocean bays from the Atlantic funnel the water through the inlets, so that rushing increases there, and these inlets are far less safe for waterborn craft than under normal circumstances. At the shift, water sloshing will produce a dangerous situation for large bays and waterways the ocean has access to. Water tends to increase speed under pressure, so will rush past Sweden and Denmark, tearing away moored boats and scouring the coastlines as it does so. Second, the amount of water that can rush in, and later rush out, of these ocean bays is delimited by time, so that a given slosh may not reach the level that it does along the Atlantic coast before reversing direction. Thus, the water may not rise as high, in a flood tide, along the shores of the bays. Third, because there is less water in the bays, and the flood tide less strong along the bay shores, it may not be necessary to escape inland to the degree along the ocean shores, or perch on as high as a hill. Nevertheless, the general advice to be inland by 100 miles, and be 200 feet above sea level, is a good guide. After the shift, the water which had pooled at the poles will return to the new equator, and this water will be cold and bearing ice torn from the polar ice. All this makes for a perilous time for anyone clinging to the Swedish coastline. Those who would survive should go inland, up into the mountains, until several days after the shift, and not attempt to go out in boats until the ocean seems to be at rest in their tides - a return to normalcy.

The Swedes are a hardy folk, used to living in an inhospitable climate, so will take the jolts and sloshing in stride. It will be a pleasant surprise to find their land warmer, with the summers lasting almost all year long. Gloom is no stranger to the Swedes, so the overcast skies will not come as the shock they will to others in sunny parts of the globe. Thus, with fewer adjustments and more pleasant surprises, this land and its quiet and intelligent folk should fare well! Sweden's main concern, as the shift approaches, will be her very attractiveness to neighbors and others around the world looking for a safe place to ride out the shift. She will have many suitors, coming forward with money under the guise of investing in the country, or coming forward requesting immigration status. In the weeks prior to the shift, they will also come forward disguised as tourists.

The approximate 100 foot high tsunami wave that will rush against and over and around Denmark will find little to stop it in Denmark. What will stop this wave as it rushes against Sweden will be the coastline of western Sweden. That portion of the tsunami that finds its way into the Baltic Sea will dissipate. Sweden's lowlands rapidly climb into highlands, so the tsunami will funnel up ravines, reaching as high and as far inland as Lake Vänern. 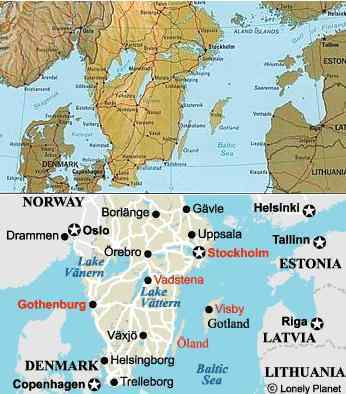