Japan does not fare well during pole shifts that exacerbate continental drift, the tendency of the continents to equalize around the globe. It sits on the edge of plates that will experience compression and plate movement, disastrous for Japan during this coming severe pole shift. Riddled with active and inactive volcanoes, Japan will find that tidal waves are the least of her worries, as volcanoes that violently explode will eradicate almost all life on these islands. Prior to the pole shift, Japan will experience her share of the increasingly severe earthquakes and volcanic eruptions that occur as Planet X approaches. Japan is rattled almost daily by earthquakes of magnitude 5 and 6. It is only when the magnitude is large enough to be classified as a 7 that international news even pays attention. The country has learned to live with such quakes, its infrastructure built in anticipation of earthquakes, and before the modern era, housing was built with bamboo and with very flexible construction designs that can creak and tilt but not shatter. We are speaking here of quakes prior to the pole shift with a magnitude of 8 or higher, truly in the scale of a 9 but perhaps not called that because of the USGS coverup on quake magnitude. These quakes will rival the large quakes that Japan has historically suffered periodically, but will be characterized by sympathetic adjustments in the Pacific Ring of Fire not normally accompanying large Japan quakes. The whole region will be seen as under pressure from subducting Pacific plates and the reaction to this pressure.

Due to Japan's position on fault lines that lie under the ocean as well as land, tidal waves will result on occasion from these increasingly severe plate adjustments. Those living in coastal cities will thus find tidal waves resulting from earthquakes increasing in severity as well as the earthquakes themselves, leading up to the pole shift itself. The relatively narrow land will be battered and shaken, leaving the populace with few places to go. The tsunami press will be largest directly at right angles from the islands, assaulting the coasts so the water is forced up into the highlands, not along the coasts at an angle such that the force of the water might be turned out to sea. In some cases, during the pole shift, the water will rise high enough to surge completely over the islands, washing them clean.

For Japan, there will be no safe place. It is like asking where in a tornado one should stand to avoid the tearing of the wind! So much is unpredictable. It could be assumed that some spots, high up so that tidal bore does not force water up ravines to high places, or to the side of volcanoes, so that hot gases and dropping rocks do not descend upon one, might be safe. But with the air and sea in turmoil, this would be unpredictable. Japan will experience an average of a 200 foot rise during the pole shift, but this will vary from the north end of the Japanese islands to the south. Japan lies on the N American continent, a tongue of which protrudes in that direction, encompassing the Aleutian Islands, Japan, and the Kamchatka region. We have stated that this tongue will not break off to become a separate plate, despite all pressure on it. That portion of the Japanese islands closer to the main plate, to the north, will remain further above the waves after the shift, due to rising with the main N American plate which will ride over the Pacific plates. Due to the crumbling of the Philippine Plate, the region near the southern part of the Japanese islands does not get pushed up as far, as that which would subduct under southern Japan finds an easier path through the crumble. Thus, northern Japan might find land rising 250 in elevation, while southern Japan experiences a 150 rise in elevation.

Japan is at the juncture of several plate boundaries. The southern islands are situated on the great Eurasian Plate, and fare the best because this plate is massive and stable. The northern islands are on a tongue of the great N American Plate, but this tongue is likewise stable although it comes under extreme stress particularly at its tip, sometimes called the Okhotsk Plate. It is the pressure from the Pacific that is the issue, as the Pacific is compressing. Likewise, the Philippine Plate is at issue, as it loses in the compression game and in essence is pushed under and lost. The Philippine Plate is tipping, rising at the Mariana Islands and diving under the tongue of the Eurasian Plate that holds Indonesia. This tongue is itself being pushed down. Imagine the domino effect of the Mariana Trench folding against the Philippine Plate, tipping this sideways to drive the western edge under the tongue holding Indonesia, which is at the same time breaking and bending to subduct under the curve of the Indo-Australian Plate.

This is a domino pressure, happening almost simultaneously. The scenario guarantees that the islands of southern Japan will be doing mountain buildings, particularly at the point where these plates converge at Mt. Fuji. The pressure from the compressing Pacific is applied directly on the northern islands of Japan, however, where the Pacific Plate is pushing under these islands. Thus when plate movement begins, there will first be a tipping and pushing down and under the south of Japan, and then as resistance here is eased, pressure on the northern part of Japan increases until an adjustment is made there likewise. The great quakes to afflict Japan prior to the pole shift will be thus in the south first, followed by great quakes in the northern islands of Japan with consequent tsunami heading for N America. Just when this will hit, and how much time will pass between the quakes in the south to be followed by quakes in the north, we cannot say. 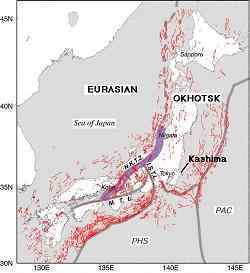 Historically, Japan has suffered tsunami as high as 100 feet. Japan anticipates such tsunami on its South Island, as plate movement is not new, and the direction of movement also not new. However, the tipping of the Philippine Plate will be more extreme this time, so in an abundance of caution those concerned about tsunami should avoid the coastlines that will be affected by quakes in the South Island and allow for a tsunami at a potential height of 100-135 feet. The Japanese government most assuredly is aware of the presence of Planet X and the tight security that the US and major governments have imposed on this information. They have been part of the cover-up for over a decade.

As horrific as this quake has been for Japan, it is not the start of the Japan 7 of 10 events we have described. For the 7 of 10 events, Japan must experience a series of quakes, starting on the South Island and then proceeding to the North Island. This quake is of that size, but not in the correct sequence, not yet. The sinking of Indonesia was predicted to occur without significant quakes there, what we called a silent adjustment. The rolling of S America is predicted to have a series of significant quakes in the 8-9 range. The African roll and drop will again be silent and the adjustment of the New Madrid again involving significant quakes in the 8-9 magnitude range. The New Madrid adjustment in particular will be confusing to many, as quakes will increased in frequency and severity, so that quakes of magnitude 6-7 are not uncommon in the New Madrid area before the large 9+ quake that accompanies the tearing of the fault line occurs. Thus quakes can occur before the 7 of 10 adjustment, but not be an indication that the 7 of 10 sequence has jumped ahead.

The 7 of 10 quakes for Japan we have estimated to be declared as magnitude 7 on the South Island (though in actuality magnitude 8) and magnitude 8 for the North Island (though in actuality magnitude 9). For the South Island the 7 of 10 jolts will primarily take place off shore on the border with the Philippine Plate, where most quakes afflicting the South Island of Japan in fact strike, and along and between the fault lines that cross the South Island. For the North Island their 7 of 10 jolts will be at the plate border where subduction of the Pacific occurs to the center of the island along the volcanic belt. This is where the greatest pressure will be sustained, in this zone, from friction of the Pacific Plate scraping along under the N American Plate.

Hokkaido Island of Japan is subject to pressure from the subduction of the Pacific Plate, which creates mountain building deep below with consequent rumpling of the land above. Rumpling can be described as portions rising while other portions drop and roll, like the waves arriving on a beach and turning upon themselves at the return to the ocean. Earthquakes are frequently described as having the appearance of waves rolling along the land, the land rising and falling. If the wave is large enough, the portions rising and the portions dropping and rolling have enough difference in height to cause the landscape to tear apart, as was seen in Hokkaido.