Colorado is a relatively safe place but a popular one among many contactees who are flocking there. Although within building mountains, Colorado will experience a push over the lands east rather than an up and down motion as in the past. Eastern Colorado descends into the plains, with various rivers and streams draining from the hills into these plains. For these two reasons, eastern Colorado will find itself considered a welcome place for desperate refuges from the wetlands below. Those on the plains will look to the hills as water begins to lap at their doorsteps, and head for these hills. As the rivers and streams fill up and roadways are flooded, they will increasingly use boats to move up into the safety of the foothills of Colorado. Thus, those who have settled along these rivers and streams will find themselves a port of safety for desperate survivors, and should prepare for this inundation of desperation.

We have stated that mountain building will not occur in Colorado, as it has in the past, but rather that the mountains will push over the plains to the east. Mountain building occurs when a rock layer pushes under another, tumbling and shattering the top layer. The current Continental Divide in Colorado has so many layers of rock beneath it that what is pushing under can no longer jumble the top layer. Instead, the whole mass pushes east over the plains. Colorado rapidly drops in elevation to the east of the high mountains, and it is the land in lower elevations for a 50 mile swath that will find itself rumpled and tossed before what appears to be mountains on the move. As surprising as it may seem, this process does not kill all life before it, but is rather a rough ride where roads rumple, cars are tossed to their sides, and housing collapses. This is expected in any case during great quakes. Afterwards, the rumpled area will find itself looking down upon lands that were formerly on the same level, and survivors will realize what has happened. This process has likewise occurred during prior pole shifts. Thus, safety in Colorado might entail being to the west of the Continental Divide, rather than to the east. 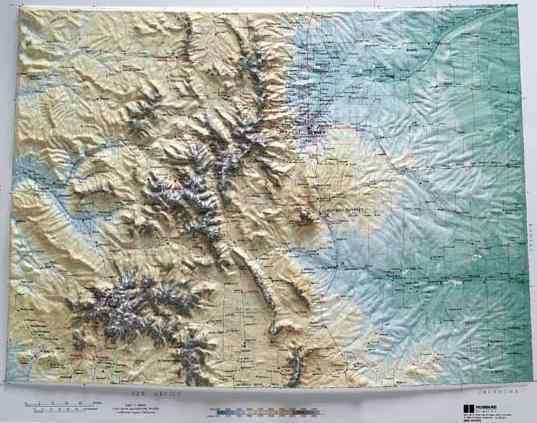