The Canary Islands stand jutting out into the Atlantic, close to both the old and new equator and thus with a delightful climate and ocean breezes. Storms are their only concern, and storms will be their undoing during the pole shift. With ocean water on all sides, and nothing to break the wind, they will be subject to overwash from massive ocean waves colliding as water moves both to and from the poles, and into and out of the Mediterranean. Hurricane force winds likewise will batter these tiny islands full force, so seeking high points on the islands as an escape from the huge waves will only get one washed away. Would be survivors are advised to seek a home elsewhere, until long after the shift has passed.

Will La Palma volcano in the Canary Islands, which is already damaged, experience an earthquake and fall into the sea prior to the pole shift and thereby cause a huge tsunami? It has long been postulated that the Canary Islands are fragile, and will collapse into the sea upon another quake, creating a tsunami. This is a human theory, and absurd. First, monstrously high waves are not caused by displacement of water across the ocean, as water moves in all directions, and the pressure reduces steadily during the distance traveled. Do these human theorists presume that tunnel vision exists in the ocean, such that pressure only moves in one direction? This is akin to the human propensity to divide what they are dealing with into tiny bits, and only consider a bit at a time, as though putting the bits together is too much of a headache. Thus, Newton's supposed Laws are considered separately from Einstein’s math, as they don't work together. A land slide, under water, will create not a force of water moving across the ocean, but a void causing water to fill that void. Thus, a swirl of water, moving into the void and then out again, would occur, locally.

The Canary Islands lies along the border of the African and Eurasian plates, but these giants will not collide during the forthcoming pole shift nor in the plate movements that occur prior to the pole shift. As we have explained, Africa will drop as it rolls during the 7 of 10 scenarios, thus relieving pressure in the region of the Canary Islands. Thus, except for roiling water which will make the beaches unsafe during Africa's 7 of 10 roll, the Canary Islands will survive the 7 of 10 relatively unscathed. Where much has been made of a volcanic shelf from the La Palma volcano, potentially dropping into the Atlantic and starting a huge tsunami heading toward the East Coast of N America, we have stated otherwise. This will be at most an underwater landslide on the island, creating local tsunami only when it occurs. However, the Canary Islands will not fare well during the forthcoming pole shift. Despite some of the islands having an elevation in the interior over 1,000 feet above sea level, anyone on the islands during the pole shift can expect to be washed away by the colliding and wind-whipped waves. 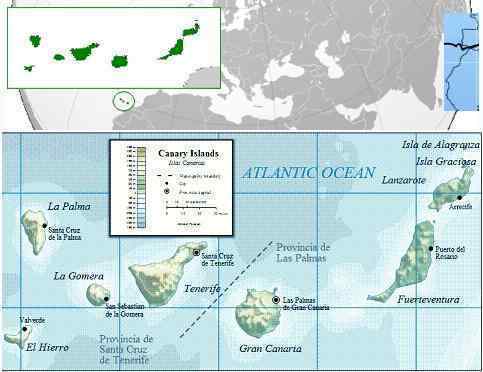 The Canary Islands make people nervous because they are in a tenuous position. Formed from volcanic lava flows which in some places are supported by the ocean. The lava in these places has air bubbles in it and is therefore equivalent to the weight of water, thus floats. We have addressed as invalid the speculation that these floating projectiles of hardened lava might break off and cause a tsunami. Why then are the Canary Islands so jittery, no pun intended? There are no fault lines under the Canary Islands, but they are narrow projectiles sticking up above the waves, and as such vibrate when the African Plate frees itself along its long border with the Mediterranean, down through the Red Sea, down through the Indian Ocean and up through the Atlantic. Particular the pulling apart of the Atlantic, already in process, creates a jitter on the eastern side of Africa. Those on the Canary Islands feeling nervous about this ought to take the clue, as those who remain on the island will not survive the pole shift.